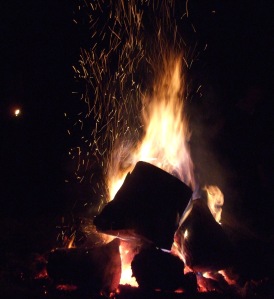 At the sight of blood pooling under Jason’s body Henry trembled. What am I going to do? How can I explain this? With few options he needed to get rid of the corpse. The waterfall warning came back in a flash.

Jagged rocks lay at the base of the sixty-foot waterfall a quarter mile away. Henry placed Jason in the kayak and tossed the knife in the river. Confident it would be classified a kayaking accident. Although there was little blood Henry burned his clothes and bathed. He peered at the stars and smirked. Now, how to deal with Hope?

Emanating from the crackling fire the smell of trout penetrated the air.

Unable to meet Henry’s eyes, “Hope and I are in love.”

Henry palmed the filet knife. “You’ve been screwing my wife for months and now you’re sorry!”

“We never meant to hurt you.”

In an upward arc the knife permeated Jason’s chest. Henry’s face became pale. “What did I do?”

Jason doubled over in a coughing fit a sucking sound coming from the wound.

With his final breath Jason said, “I forgive you.”

Maria now an old woman stood in her childhood home one last time. Awoken one evening and raced out the door by her parents almost fifty years ago. Flower wallpaper, which adorned her bedroom walls, now dilapidated from years of neglect. She prayed the metal box remained under the floorboard. The letter from her parents on her sixteenth birthday was intact. The last line read, “Remember you will always be our special angel. Love, Mom and Dad”

The tears poured out. A sharp chest pain gripped Maria, but it was too late. She collapsed to the floor dead.

Robert watched his target’s every move for two weeks. Tuesday’s and Thursday’s he would enter the third floor apartment at three p.m. and leave two hours later. For the best vantage point Robert chose the closed dentist’s office. He crouched into position rechecked the scope and steadied the M24 rifle. His target appeared in the doorway. Without hesitation he fired one hollow point round through the target’s right eye. Robert calmly collected the spent shell casing and exited using the service elevator. With the confirmation sent, he disposed of the rifle, and phone in the nearby lake.

This is a Friday Fictioneers submission for 6th June. Thanks to Doug McIlroy for the photo.

Without the Internet, he had no doubt he’d have ending up firing gunshots indiscriminately in the precinct by now. It would have been the only way to keep himself from being devoured by the overwhelming sense of anomie. Instead, he’d been given a chance to be good at something, to make an identity for himself.

A message flashed onscreen-Your Order Has Been Dispatched. He smiled.

The idea had come to him from an old Hitchcock film. It was far easier to avoid detection for one’s crimes if someone else could be persuaded to carry them out. Granted, a little quid pro quo was to be expected, but there were always violent men in need of a little hacking expertise and the Internet was the greatest labour exchange device there was.

He blew out a…

The day sped by as they unpacked box after box. Bill woke around three in the morning, from the cries of their daughter, Evy. Her fever spiked to one hundred and two point six. After her medicine, diaper change, and goodnight kiss, he decided to do some work in the living room.

For the first time all day, he was able to put his feet up and focus on the art for the new ad campaign. Although the mess on the table next to him beckoned for his attention, as the image loaded he drifted off to sleep.

“Get him in exam room one. Do an x-ray and an ultrasound.”

The results were non-conclusive, which meant a CT scan. Once complete the determination, Appendicitis, immediate surgery was successful. She smiled. For the first time ever, feeling like a real doctor. 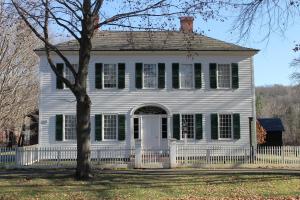 The wall separating the kitchen from the living room had been the subject of many arguments. Tracy couldn’t take it for one more day. She was sick and tired of waiting for Jason to finally take it down. She stood twenty-pound sledgehammer in hand, wearing her old blue jeans, green t-shirt, mask, and goggles. With Jason still sleeping, she took out her aggression on the wall.

“Jason…Jason!”screamed Tracy, as she dropped the hammer and took a step back.

Jason burst in the room moments later, wearing only his blue boxers.

“What’s wrong?”noticing the fear in her eyes

“Seriously, look”, pointing behind him to the large hole.

He went pale, as a mummified face stared back at him. Jason had to turn away from it, before he lost his dinner. With a quick silent look of agreement, they ran out the front door. Jason wearing only boxers settled for a blanket from the trunk, as opposed to going back in the house.

During the forty-five minute wait for police, Tracy kept insisting they move. Though frightened, she watched the events unfold from the window. Drywall was cut away in large pieces and bagged, pictures were taken of the body, before one of the officers tried to remove it. His hand slipped, the body fell face first on the living room carpet with a thud. As it was hauled away Tracy heard someone yell, “We’ve got another one!”

About fifteen minutes later, a second smaller body was pulled from the wall. It almost felt like a dream, as up to now she had only seen dead bodies in photographs. The mummified couple ended up being, the original owners. Jason and Tracy were asked question after question, about the man and woman who sold them the property. The house was taped off as a crime scene for over a year, before it was released. Jason and Tracy took the money from the sale and never looked back.

“Stop, police,” said Sgt. Collins, while he chased the suspect through the fair. The blonde, teenage boy wearing a black jacket, blue jeans, and holding the ticket office moneybox ran though the crowd. He released the brake on an unattended lemonade cart, which started to roll towards a group of children on a field trip. Sgt. Collins only a few yards behind the suspect broke off his pursuit. A girl no older than seven with long black hair, wearing a blue camp shirt, and kaki shorts froze in place, as she watched the cart come towards her. With no time to lose, Sgt. Collins dove in front of the cart getting them both to safety. For his act of bravery the crowd cheered Sgt. Collins, meanwhile the girl ran back to the rest of her class. Moments later a loud bang permeated the fair, as the cart crashed into the metal gate around the Ferris wheel. The balloon vender, former army private first class still suffering from PTSD dove for cover and let go of the balloons. Sgt. Collins looked back towards where he broke off pursuit, only to find Officer Bradley already apprehended the suspect.

The first time Dave ever had to speak in front of a small crowd of people was the fourth grade. A couple of days before the assignment he was excited, until Mrs. Rowan called on him to present. It was at that moment his stomach betrayed him, with a deep breath he stood. The nausea rose with every step, as he could almost feel all eyes on him. His legs felt heavier than normal, as he turned to face the class. He opened his mouth to speak, the room started to spin and he lost the battle with his stomach. The worst part was that it landed on the desk and shirt of Lindsay, the prettiest girl in class.

Today some twenty-five years later, after avoiding speaking publicly his whole life, Dave’s nightmare was about to come true. It was just after lunch, when his boss Diane walked into his office ignoring he was on the phone.

“That’s correct. We will reship the — “, said Dave

“Can I call you back in a couple of minutes, Jerry? Diane just walked in….Thanks.”

“Not a problem. Just putting out a fire. What can I do for you, Diane?”

“Cynthia had to go home and I need you to run the sales meeting at three.”

“To be honest I’m not feeling great myself, can Rich or John cover it?”

“No, this is an important account. Dave, I need you.”

After she handed him the customer file, Diane left without another word. Knowing he didn’t have a choice, Dave’s stomach started turning just at the thought. The hour in between feeling like seconds, before he had to enter the conference room.

While setting up the presentation materials, feeling like he was back in Mrs. Rowan’s class. He was just about to walk out the door, when a very familiar voice came from behind him.

“Sweetheart, what are you doing here?”

“I’m your three o’clock meeting. I was going to tell you about my promotion at Sunday’s dinner,” she said before the other members walked in.

With his daughter watching and waiting, he took a deep breath before starting the presentation. The presence of Ivy easing his nerves allowing him to find his voice and focus. Just under an hour later he said, “Sign on page fourteen and will ship out your first order tomorrow morning.”